We would all say that learning is important, yet often the systems and processes we use prevent us even from transferring knowledge to help us improve performance, whether it be as an athlete, official, organiser or volunteer. When I started learning about the rules governing the sport of sailing in earnest I referred to an annual publication that the very experienced sailing judge, Bryan Willis, produced.

To solve this block in knowledge development Bryan would compile a summary of all the interesting cases from international juries on which he had severed over the season. Not all judges are as contientious to take on such a time consuming task, including me!

The same 'block' to learning and knowledge transfer can be experienced between the Olympic area and the rest of competition sailing. Here at Weymouth & Portland the organisers have incorporated many innovations in particular to make the event more accessible to spectators, supporters and the developing fan-base. The BBC coverage has been sensational - lead by Richard Simmonds and Leigh MacMillan, though the official Olympic Broadcasting Service less so (I guest they have less sport specific experience than APP Sunset + Vine, who are providing the feed and editing for the BBC coverage). And the Nothe Fort spectator area and beach Live Site have proved a massive success.

Let's hope the learning gained from incorporating these innovations can be captured and taken up by the Rio 2016 organisers.

I hope that the official Knowledge Transfer phase of organising the Games will be sufficiently effective enough to ensure the Olympic sailing regatta at Rio 2016 will be covered as least as well as that of London 2012.

Not originally included in the bid proposal the local organisers convinced of the merits of creating
Posted by Ewan McEwan at 14:40 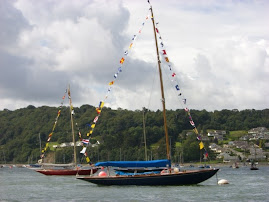